Lessons Re-Learned from an Old Headline

Lessons Re-Learned from an Old Headline 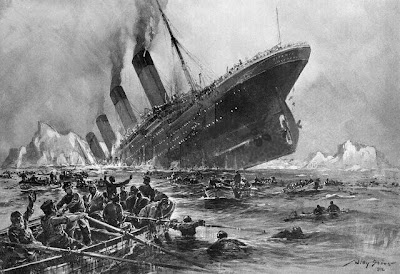 I have a grandson that is fascinated with every aspect of the Titanic which, as we know, sank on it’s “maiden voyage” over 100 years ago! Of the 2220 people on board this luxurious liner, only 705 were rescued by the Carpathia! The story is very sad, to say the least.

But there is one aspect of this tragic story that we seldom hear about: There was another ship (the Californian) which was stopped only 10-20 miles away from the Titanic as she was sinking. She could have rescued all of the remaining passengers—everyone could have been saved!

After Titanic hit the iceberg, she sent out numerous calls for help: “S-O-S” and “C-Q-D.” The investigation committee eventually learned why the Californian did not respond to Titanic’s distress calls: the wireless receiver had been turned off 10 minutes prior to the collision. Sadly, her distress signal was not being received by anyone aboard the Californian.

“Throughout the night, no one on board the Californian attempted to wake their wireless operator, and ask him to contact the ship to ask why they were firing rockets and trying to signal them, until 5:30 AM. By then however it was too late — the Titanic had gone down at 2:20. When she had slipped below the water, the sudden disappearance of lights was interpreted by the Californian crew that she had simply steamed on her way.” (http://en.wikipedia.org/w/index.php?title=Stanley_Lord&oldid=541407990).

There are people “drowning” all around us—next door to us, in our neighborhoods, on our jobs, at school– people who are struggling to “keep afloat!” Addictions, pregnancy out of wedlock, others on the brink of divorce, drowning in financial problems—they need a friend, need a helping hand, a church. They need the Lord in their life!

Early in His earthly ministry, Jesus was asked which of the commandments was the most important. Here is His reply:

“‘You must love the Lord your God with all your heart, all your soul, and all your mind.’This is the first and greatest commandment. A second is equally important: ‘Love your neighbor as yourself.’ The entire law and all the demands of the prophets are based on these two commandments.” (Matthew 22:37-40, NLT, emphasis mine)

Jesus cares, and we must too!